British cartoonist for over 25 years, published in 20 books, and chair and co-founder of the Cartoon Museum in London.

Oliver grew up in London and the Cotswolds and from an early age developed a love of cartoons and caricature through the books of H M Bateman, Thelwell, Tintin and Charles Addams. As a child and at school Oliver drew extensively. He is completely self-taught. After Eton College, where he won the Gunther Graphics Prize for Art, Oliver attended Exeter University, and then spent ten years working in the City of London.

However he saw the light in 1995 and left the City to become a full-time cartoonist and illustrator. His early cartoons were published in Punch Magazine, Paris Match, The Beano, The Dandy and The Spectator, and from 1995 to 2020, Oliver was the regular cartoonist for The Field Magazine. From autumn 2019-2021 Preston has been drawing weekly cartoons for Country Life Magazine.

His cartoons have also appeared in Cotswold Life and The Polo Magazine amongst others, and he has contributed to The Times, The Guardian, The Daily Mail and The Independent newspapers.

With a keen eye for social observation, his cartoons are beautifully drawn with a very individual style. The situations are very close to people’s everyday lives, and there is often a splattering of languid lovelies, dilettantes and doting dogs. Oliver has developed a wide following, especially for his shooting and skiing cartoons, and drawings that depict the quirkiness of British town and country life.

He has also produced twenty books of his cartoons, (as collections and illustrations) which can also be purchased as limited edition prints, and as humorous birthday cards.

Oliver is based in Gloucestershire and over the past twenty five years, he has developed a loyal customer base, working for a diversity of clients, on caricature commissions, christmas cards, cartoon invitations, and much more.

Today, Oliver Preston’s greeting cards are published by Beverston Press which ships to trade and retail customers around the globe. You can see more here: https://en.wikipedia.org/wiki/Oliver_Preston

Oliver Preston and the Cartoon Museum

Oliver was appointed the youngest Trustee of The Cartoon Art Trust in 1992, and founded and devised the first Cartoon Art Trust Awards held 14/11/95 at The Royal Society of Arts, for political, gag, pocket, advertising, strip cartoons and caricatures.

Trustees raised £350,000 to take an initial 7 year lease on a converted dairy off Museum Street, opening Britain’s first museum of cartoons. Patron, Prince Philip, The Duke of Edinburgh officially opened the premises on 22nd February 2006. The museum had three main galleries displaying original artwork from British cartoons and comics, past and present. Temporary exhibitions since 2006 have featured Private Eye, William Heath Robinson, Steve Bell, Giles, Pont, H.M. Bateman, Viz Comics, Ronald Searle, The Beano, Ralph Steadman, Rowland Emett and many others. At the heart of the museum lay its growing collection of cartoons, caricatures and pages of comic-strip art. The foundations of modern British political and social cartooning can be found in works by Hogarth – whose social satires are regarded by many as the foundation of the British cartoon tradition, James Gillray and Thomas Rowlandson. The permanent collection also included works by a number of fine Victorian cartoonists including John Leech, George Cruikshank, George Du Maurier and John Tenniel. William Heath Robinson – whose name is synonymous with outlandish and hilarious contraptions – hung with his contemporary, H.M. Bateman, two of the most successful cartoonists of the first half of the 20th century. Also featured in the permanent collection are Pont, Gerald Scarfe, Ronald Searle, Giles, Martin Rowson, Steve Bell and a host of favourites from newspapers and magazines. Throughout the early 2000s the museum added significant collections of comic and graphic novel art, and hosted diverse exhibitions celebrating the new genres of cartooning. In 1995 the trust set up Awards to celebrate the very best of British cartooning – political, strip, caricature, pocket, joke – wishing to recognize outstanding practicing British cartoonists. Searle, Steadman, Scarfe, Thelwell, Fluck and Law, Peter Brookes, Mac, Garland, Raymond Briggs, Giles have received Lifetime Achievement awards and over 30 years Young Cartoonists in U18 and U30 categories have been rewarded. The 2009 winner went on to win an Emmy for his work, and many have gone on to become professional cartoonists.

Until recently the Museum was entirely self-funded, with support from charitable trusts, admissions and trading income. The museum’s collection of original art has grown from 500 items to 6,000 and the library to 18,000 books and comics.

A NEW HOME IN WELLS STREET

At the end of 2018 the museum’s lease was set to expire and trustees managed to secure a 25 year lease at a peppercorn rent from landlords Great Portland Estates under a section 106a, enabling the museum to have a new – permanent home from the beginning of 2019. £1,100,000 was raised from charitable trusts to renovate the space into a modern new museum and building works were carried out in 2019, coming in £100,000 under budget. The new museum opened in July 2019, with two exhibition galleries, and a Clore Learning Studio, and office premises were rented on a five year lease in Margaret Street nearby.

In March 2020 the museum was forced to close temporarily, after having seen visitor numbers up 116% in January and 125% up in February 2020. Trustees were very concerned that its reserves would run out in October 2020 without any income from trading or admissions.

The museum was reopened in May 2021, with a new exhibition, V for Vendetta, 30 years after the Cartoon Art Trust’s first exhibition.

The Art of Laughter at the Ashmolean Museum

The Prime Ministers to coincide with Lord Baker’s Book

All in the Stepfamily

The 100 British Cartoonists of the Century

Dennis the Menace: 50 years of mischief

The Art of Leaving Out: a Phil May centenary exhibition

A Mixture of Gin and Buttercups: Michael ffolkes retrospective

Hidden Treasures of Humour – Cartoons from the CAT Collection

Minnie, Plum and the Bash Street kids at 50

Grin and Blair It; 10 years of Tony Blair in cartoons

Mars in their Eyes – with Prof. Colin Pilinger

You’re not art. A collection of Calmans

Alice in Sunderland exhibition. A Labyrinth of dreams

Pont; Observing the British at Home and Abroad

A Peep into Clubland;Cartoons from London Clubs

Ink and the bottle: Drunken cartoonists and drink in cartoons

Doctor Who in Comics

WW1 Anniversary in Cartoons and Caricature

Hail to the Chief

If you would like to have more information on how to become a Friend of The Cartoon Museum, visit the Cartoon Museum website. In 2019 the museum moved to new premises in Wells Street, off Oxford street in Fitzrovia, W1. Members receive CAT’s newsletter and information on cartoons, exhibitions, lectures, children’s cartoon classes and details on the annual Cartoon Art Trust Awards. CAT has a collection of over 6,000 originals by Britain’s finest cartoonists from Gillray, Rowlandson and Cruikshank, through the Punch cartoonists, and Bateman, Pont, Heath Robinson, Ronald Searle, Giles, Mel Calman, Nicholas Garland, Peter Brookes, Steve Bell and many many more. www.cartoonmuseum.org 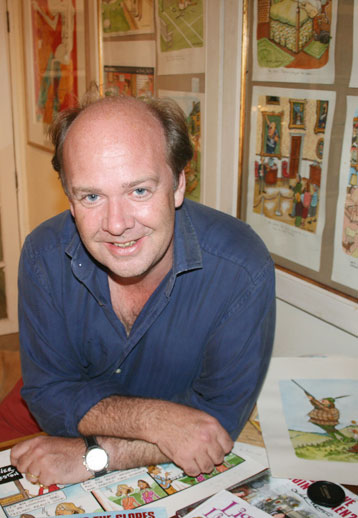